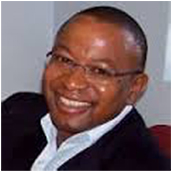 Shoni has been working in the media, communications and reputation management sector since the late 1990s. He has started and run two businesses, turned around two others and held senior positions in JSE-listed companies, as well as advising multinationals and large parastatals on corporate and business strategy, corporate governance best practice and building and managing corporate reputation.

Shoni’s first professional employment was as a financial administrator at First Rand Group before joining Business Report, initially as a sub-editor and later as banking and insurance reporter. While at Business Report he was awarded a scholarship to Cambridge University, UK, where he did research in the financial services sector as part of the Wolfson Press Fellowship programme, sponsored by PwC.

Before launching Ambani Reputation Management, Shoni held several senior positions both in corporate and agency environments including media relations manager at Nedbank; associate director at Empowerdex, the country’s first BEE advisory and rating agency; associate director at Nkonki Inc., an auditing and business advisory firm. He has led teams that have launched some of the most iconic global brands in South Africa, including Virgin Mobile.

Shoni has also served as a training facilitator at The Institute for the Advancement of Journalism (IAJ).

He holds an MBA from Regenesys Business School.

His community work includes serving on the CSM Advisory Board, an NGO whose aim is to advance inclusive sustainable economic development. He was also one of the 14 members appointed by the Minister of Tourism to the tourism sector’s BBBEE Advisory Charter Council.

He has led teams that

of the most iconic